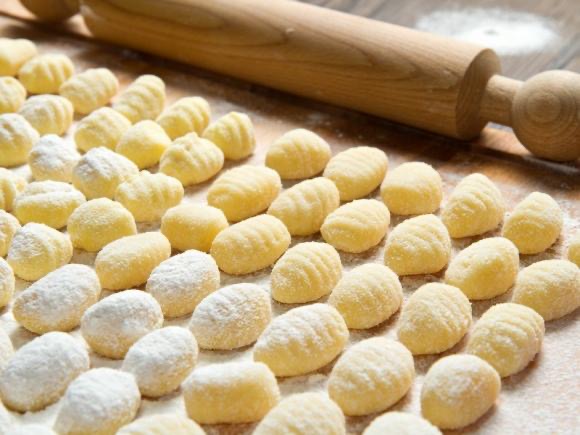 Venerdì Gnocolàr is the culmination of the Veronese Carnival and this year is celebrated on February 28, 2014. For the occasion, according to tradition, every table cannot miss the potato gnocchi which are seasoned mainly with tomato, even if there are variations of meat sauce sauces, such as veal knots, or simply eaten with butter and sage.

Preparing gnocchi at home is an ancient tradition in the parts of Verona and the Garda area, and it is a simple, fast and affordable recipe!

Peel the potatoes, cut them into more or less equal pieces to uniform the cooking and cook them in salted water until they are soft.

Remove them from the water and let them cool, after which mash them with a potato masher, adding a pinch of salt.

Collect the mashed potatoes on a pastry board or work table and add the flour, kneading until the mixture is smooth and soft.

If the dough is sticky, add a little flour so as not to harden the gnocchi too much.

With the dough and make some cords and with a floured knife cut into pieces of about 2 cm in length. Once the chunks have all been cut, you can proceed to give the shape of the dumpling by rolling the chunks on the appropriate "rigagnocco" or, failing that, on the prongs of a fork. It is important to make these stripes because in this way the sauce of the sauce will blend well with the gnocchi. The gnocchi can be eaten immediately by cooking them in boiling salted water for a few minutes and seasoned with a sauce of your choice.