WHAT TO SEE ON GARDA LAKE ON THE VENETIAN SHORE 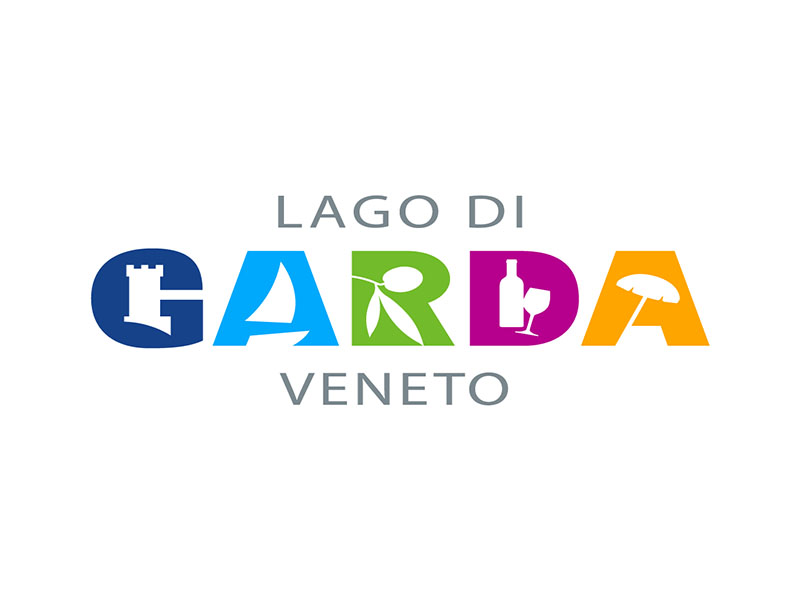 Garda Lake is one of the most enchanting places in Italy and the largest lake in the "Bel Paese". It belongs to three regions: Trentino, Lombardy and Veneto, united by a long coastal road of 160 kilometres that encircles the entire perimeter between the lake and the mountains. In this article we will talk about the Veneto part, also known as the "Riviera degli Ulivi", which stretches from Peschiera del Garda to the last town in Veneto, Malcesine.

Here are the main villages and attractions to see:

The first municipality one encounters on the Veneto shore from the Lower Garda is Peschiera del Garda, located on the Mincio River. It is a fortress town and a star-shaped medieval village framed by walls. In addition to the centre, the town is also made up of two small islands located in Lake Garda and connected both to each other and to the mainland by a system of bridges. Peschiera boasts sandy and pebble beaches as well as the famous cycle path that connects it to Valeggio sul Mincio.

Continuing northwards you come to the village of Lazise, a very pretty little town with its colourful houses and fishing harbours. The historic centre is completely pedestrianised and is very charming to visit, with its square with its chequered pavement. From the centre you can reach the Lungolago di Lazise, very picturesque with its coloured bricks and is the starting point for many walks along the lake. For those travelling with children, this is a dream destination because just a few kilometres from the medieval town centre is an incredible concentration of theme parks.

This village is an unmissable stop for those in search of romance thanks to its characteristic views and for wine lovers thanks to the DOC red wine produced here. In addition to beauty, there is also another reason: Bardolino is the happiest village in Italy. The historic centre of Bardolino is made up of fishermen's houses that were built in a fishbone pattern. In the village, the first thing to see is the 9th-century castle, followed by the numerous ancient villas that are reminders of Venetian rule. Also worth seeing is the wine museum located in the Cantina dei Fratelli Zeni, where the main winemaking tools used from the past to the present are on display. 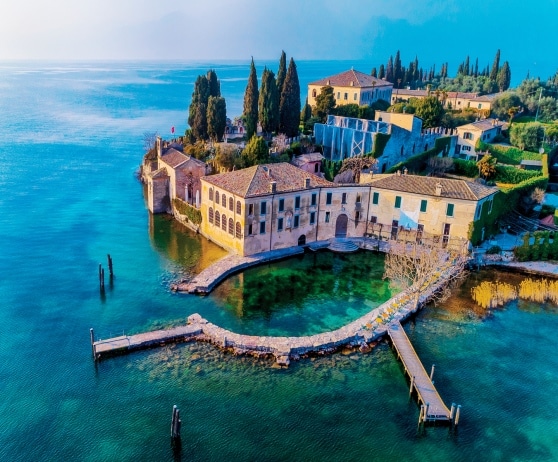 After passing Bardolino, you reach the village of Garda, which is very characteristic with its narrow streets in the historic centre. Going up along the coast, you reach the small peninsula of Punta San Vigilio, considered the most romantic spot on the lake. An avenue flanked by tall cypress trees leads to the small harbour in a landscape of old lemon houses. Here you will also find the beach of Baia delle Sirene, where you can relax by the lake.

Another village worth seeing is Torri del Benaco with its beautiful harbour. Right here stands the castle that seems to embrace the shore. Inside the fortress is the ethnographic museum and you can climb up to the tower. Interesting detail: in the village there is the only lemon house on the east coast of Lake Garda. 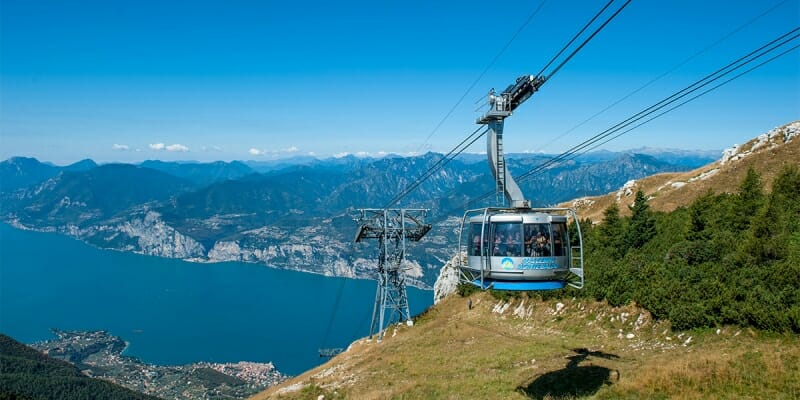 Further north, in the Alto Garda area, lies Malcesine, the last municipality on the Venetian shore before arriving in Trentino. Among the alleys of the small centre there are many historical buildings, including the Scaligero Castle, the symbol of the village perched on a rocky promontory that seems to plunge into the lake. One of the world's most spectacular cable cars departs from Malcesine to reach Monte Baldo (2218 metres). The peculiarity of this cable car is that the cabins are entirely rotating and for part of the ride they make a complete 360° turn on themselves, allowing passengers to have a total view of the panorama.

In addition to scenic views and charming villages, the Veneto side of Lake Garda is also known for one of the most beautiful amusement parks in Italy. Gardaland is located in Castelnuovo del Garda, in the province of Verona. An incredible destination for the whole family with more than 35 themed attractions that are enriched with many new features every year.

Another park not to be missed, also in the province of Verona, is Canevaworld, which contains three different theme areas. One is Movieland, dedicated to the world of cinema with shows, animations and reconstructions of film sets. Then there is Medieval Times where you can feast among ladies and knights. Another area is the Caneva Acqua Park, a water park with swimming pools, slides and water games.

For nature lovers in the province of Verona, specifically in Pastrego, there is also Parco Natura Viva, a zoo with more than 1,500 animals of 200 different species from all continents.